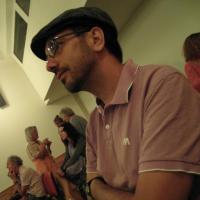 Note [2021-05-26]: This is yaup (yet another unmaintained page), due to decreased interest in software engineering. I keep it in my personal graveyard of ambandoned projects / pages, and move my personal page to stefanoskozanis.xyz

Some brief words about skozan AKA Stefanos Kozanis: Computer hobbyist since high school age, made his first steps on computer programming with his Atari computer and with some primitive Basic in the beginning, C and 68000 assembly some later. Studied Surveying Engineering in National Technical University of Athens receiving several honours and distinctions. Earned MSc and PhD degrees in Engineering from National Technical University of Athens on topics related to Computational Mechanics (with Finite Elements Method software tools developed by himself), Mechanics of Continuum and Underground Structures. Worked as a researcher in hydrology sector – software development position, developing computer systems for statistical hydrology, simulations and internet applications such as openmeteo.org. Followed a short career in Greek public sector. Pleasingly collaborating with Ivan F. Villanueva B. on building modern Web applications with latest development tools for the sharing economy such as timefyme.com and wikical.com.
Besides his interest in Engineering and CS, Stefanos is an active musician, classical trained pianist and jazz enthusiast – keyboardist, performing in several Athenian venues with groups or solo.